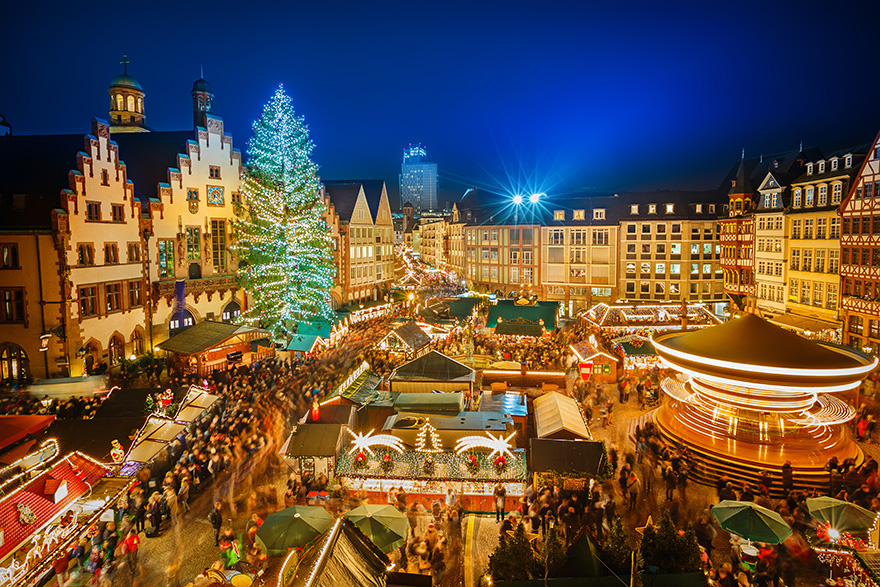 In 336 A.D., the decision was made to celebrate Christ’s birth on 25 December each year. In essence, this was a religious policy decision designed to loosen the Church’s links with the old pagan festivals.

The custom of giving presents at Christmas, in celebration of the Three Kings’ gifts to the Infant Jesus, did not start until much later. This too has its roots in paganism. Christmas overlapped with the ancient Roman festivals in honour of Saturn, when gifts were showered on citizens and slaves alike.

People bought their presents at the Christmas markets which originally took place only in the larger cities and commercial centres. The markets in Frankfurt, Nuremberg, Hamburg, Berlin, Leipzig and Dresden were especially well-known. The first historical record of the Frankfurt Christmas Market dates back to 1393.

The Christmas Market was usually held on the church square so that the faithful could wander round the Market after attending church. They would pause to admire the selection of wares – the best local crafts, toys, sweets and Christmas gifts. The toys were usually simple wooden carts, rag dolls and – much later – hobby horses and rocking horses. Until the 1870s and 1880s, parents would usually buy all their children’s toys at the Christmas Market.

Even then, Christmas Markets were places to see and be seen. They were an opportunity to meet friends and swap news and gossip. This social aspect of the Christmas Markets has survived to this day, and even now in 2018, the Markets are the cities’ meeting place during Advent. People meet here over a cup of Glühwein to chat, sample the many different Christmas goodies, and enjoy the festive atmosphere and romance of winter. The Glühwein and refreshment stalls are the heart of the Market, and are as important as the traditional crafts stalls. Nowadays, the Christmas Markets are a colourful and lively mix of crafts, foods, drink and other seasonal attractions.

This website uses cookies to improve your experience while you navigate through the website. Out of these, the cookies that are categorized as necessary are stored on your browser as they are essential for the working of basic functionalities of the website. We also use third-party cookies that help us analyze and understand how you use this website. These cookies will be stored in your browser only with your consent. You also have the option to opt-out of these cookies. But opting out of some of these cookies may affect your browsing experience.
Necessary Always Enabled
Necessary cookies are absolutely essential for the website to function properly. This category only includes cookies that ensures basic functionalities and security features of the website. These cookies do not store any personal information.
Non-necessary
Any cookies that may not be particularly necessary for the website to function and is used specifically to collect user personal data via analytics, ads, other embedded contents are termed as non-necessary cookies. It is mandatory to procure user consent prior to running these cookies on your website.
SAVE & ACCEPT
Go to Top